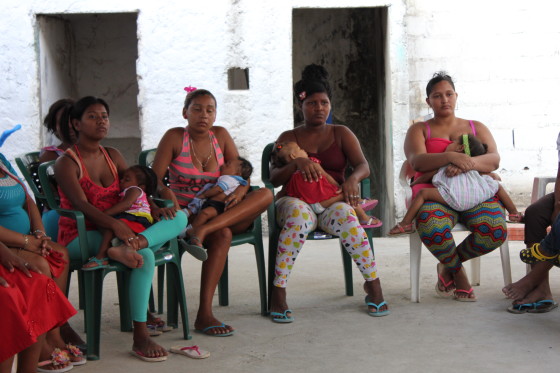 In the second week of our Disrupt Poverty Tour, an outreach project of our film DISRUPTION, we arrived in Cartagena — one of the locations where the film was shot. After a 24 hour drive up from Tunja, we arrived at the house of Agripina Perea, whose story of economic empowerment through the Mujeres Ahorradoras program is highlighted in the film. Since DISRUPTION was shot, Agripina has become involved with Funicaribe (Fundación Instituto del Caribe), a group that offer full spectrum services to women-owned business. Funicaribe is working in low-resource areas around Cartagena to offer legal services, business advice and mentoring, to women business owners. Together, Agripina and the Funicaribe staff, coordinated screenings of the film in various locations in neighborhoods that work. Not only does the film feature Agripina, it offers a great starting point to begin a conversation, generate ideas, and motivate participants around social entrepreneurship for women.

We began the week by showing the film twice with women who had been featured in documentary itself: Our first night in Cartagena, we screened right outside Agripina’s home in the neighborhood of Revivir. While she has appeared with the film many times, this was the first time the film had been shown in her neighborhood. Our second day, we traveled to the neighborhood of Boston, where the Women’s Recyclers group also featured in DISRUPTION lives and works to screen with a group of women involved in Funicaribe’s work.

Following the screening, the group of women dialogued about their experiences saving, and their ideas for growing small businesses. Of the 38 attendees, eight had participated in the Mujeres Ahorradoras program and graduated out of it. The Women’s Recyclers group, all of whom were in attendance, had since disbanded but a new street cleaning and recycling group had formed as well. Women shared their ideas and hopes for the future — Karina Barri, for example, hopes to open a restaurant, while Hilda Julio aspires to grow a community cafeteria and Gloria Acosta an ice cream store.

These women will be working with Funicaribe to establish and expand their ideas — we interviewed a number of them as well, and will be following them over the coming months and years to see how their work grows.

Nora is the Outreach Director at Skylight.