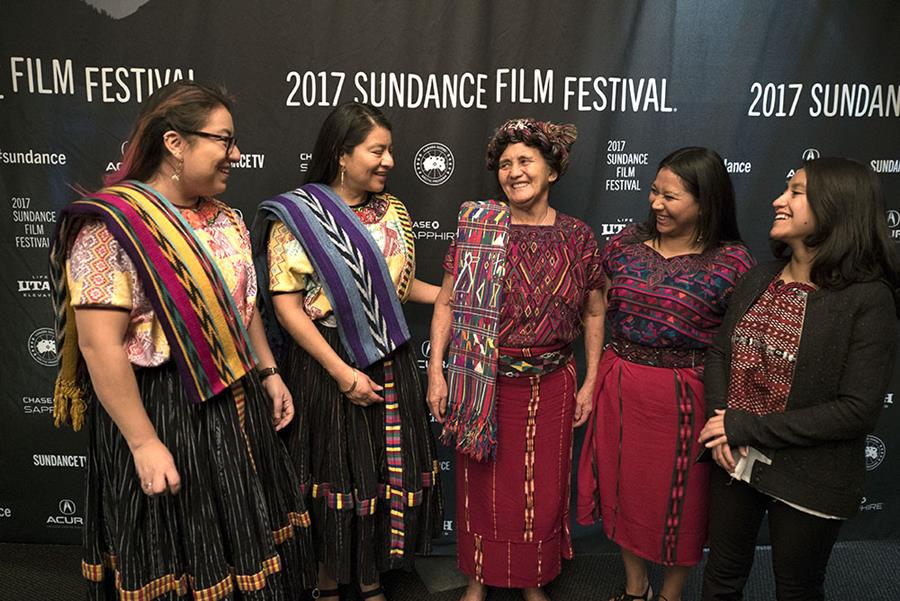 500 Years has launched into the world, with Mayan protagonists Irma Alicia Velásquez Nimatuj and Andrea Ixchíu receiving standing ovations at every stop on the festival circuit! With 5 sold out screenings at our Sundance world premiere, we saw enthusiastic crowds connecting with the film’s story of sustained nonviolent resistance, pointedly resonant in the wake of the Trump inauguration. People kept saying, “But this is what’s happening to us —the Guatemalan story is our story!” The Mayans teach us that life in resistance is a state of being, that requires resilience to endure setbacks such as the Trump election, and solidarity to achieve inspiring historic moments like those portrayed in 500 Years.

At the Human Rights Watch Film Festival in London and the International Film Festival and Forum on Human Rights in Geneva, we were accompanied by Andrea Ixchíu, a Mayan activist in her 20’s who figures prominently in 500 Years and rocked the house at all the Q&A’s! A rebel to her core, in her teens she had a punk band in Guatemala and now produces an online news program for her generation and has become a national leader in the fight for social justice in her country.

Going forward we’re headed to the Ashland Film Festival, Full Frame Documentary Festival, and the New York premiere on June 11 in the Human Rights Watch Film Festival. At the New York premiere we’ll be presenting a sneak peek of The Resistance Saga, a cinematic and artistic high-profile event designed to galvanize audiences to fight back when society is faced with authoritarianism and demagogues, and to highlight the role that the arts can play in creating, strengthening and communicating narratives of nonviolent resistance. In so many ways, indigenous peoples all over the Americas have set the example of long-term courageous and strategic resistance against daunting odds, with a powerful example being the saga of the Mayan people as depicted in our films When the Mountains Tremble, Granito: How to Nail a Dictator and now 500 Years. These will be day-long immersive events that include all 3 films, the Mayan women protagonists of the films, and a concert by Mayan protest singer/songwriter Sara Curruchich. We are planning a national tour of The Resistance Saga and at each stop local movements of resistance will be invited to participate in a facilitated discussion with the audience and Mayan resistance leaders, with a focus on sharing tactics and building networks of solidarity.