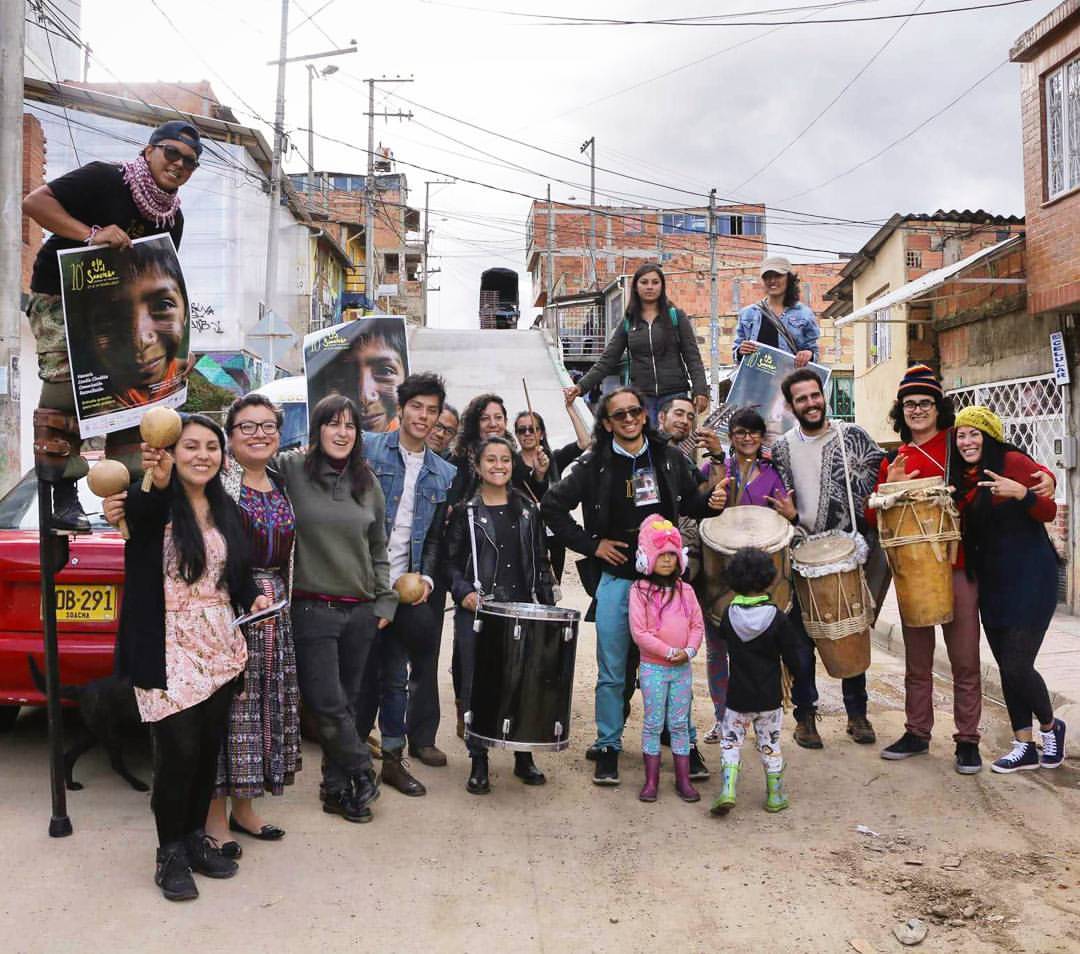 Bolivar City
A crimson tide prevails in the landscape as you approach Ciudad Bolívar, a town located south of Bogota, the capital of Colombia.

By the hundreds the houses made with bricks form reddish blocks that contrast with the gray of the concrete and the asphalt. There is a lot of movement in the streets, people who travel, vendors, cars forming long lines. Horns, salsa and merengue music coming from the interior of the vehicles.

It’s November, 2016, and my second trip to Colombia, I’m going to Ciudad Bolívar in a taxi. The driver asks what is a Guatemalan tourist doing going to a “red zone” when there are more beautiful places in Bogotá to visit?” I answered that I’m going to meet the people of Ojo al Sancocho and the Potocine. The driver quickly nods and responds: “Ah, the peladitos of the cinema”.

After having participated in Solidarilabs and having met with Daniel Bejarano, the director of the oldest and largest community film festival in Latin America “Ojo al Sancocho”, I was invited to see its headquarters and the construction of the cinema community that they built. Daniel and his family welcomed me into their home and I immediately realize that something unusual is about to happen. 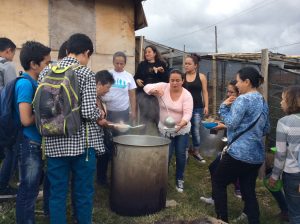 Yaneth Gallego, Daniel’s wife, prepares a big pot of food, his daughters pack bread rolls, Daniel tells me about what I will see in Potosí, the community where they have their operations center. He explains that it is a community within Ciudad Bolívar, that the community’s territory is 73% rural and 27% urban, and most of its founders as well as current inhabitants come from forced displacement from the countryside of the city and are victims of the violence that the country has lived for more than 50 years. Daniel explains that this is one of the reasons why Ciudad Bolivar had been one of the most stigmatized places in the country. Nowadays countless social organizations, municipal organizations and local administrators are transforming these negative images into opportunities to make visible great social, community, political and cultural developments that have been created here in recent years.

Since 2008, Daniel and Yaneth have been involved in a film, video training and distribution process and are organizing the most diverse and largest Latin American community film festival in the region, bringing cinema to all corners of their community, using it as a pedagogical tool for social change. This festival has been an inspiration for Red Tz’ikin’, our collective commitment to film the Guatemalan experience, of which I am a part.

We left his house and we drive to the Potisí community. On arrival I see the beautiful cinema they have built, they call it the PotoCine, a space, a sanctuary for film and video projection. Those of us who have organized community and street festivals know how valuable it is to have a decent space with sufficient conditions to share our work and serve the community. This room has been built by the hands of Arquitectura Expanded and by the neighbors and neighborhoods of the area. This visit is a great motivation for me to want to return and experience the Ojo al Sancocho festival. 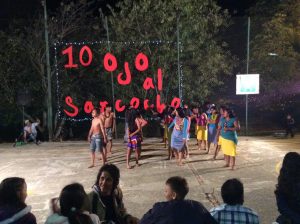 The documentary 500 YEARS is the story of the most recent years in the life and resistance of indigenous people fighting for justice. In 2013, I was invited to be part of this project by the director Pamela Yates, an American filmmaker who for 35 years has documented Guatemala and the struggles for justice of many peoples of the world.

This documentary premiered in January 2017 at the Sundance Film Festival, the mecca for documentaries and independent films. Since its premiere, I have accompanied Pamela Yates, presenting 500 YEARS in many parts of the world visiting universities, movie theaters, human rights festivals. There I was able to talk about Guatemala, the people who fight, the communities that resist the extractive industry model, racism and violence. Guatemala, a country that despite having celebrated 20 years since the signing of the Peace Accords, continues to have a culture of impunity and corruption at its center. 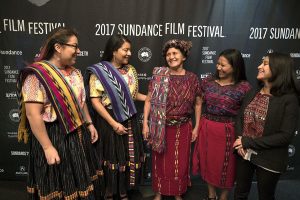 500 YEARS was invited to be the opening night film of Ojo al Sancocho film festival, whose motto this year has been “Dreaming is Resistance.” Colombia has recently signed its peace agreements, putting an end to the longest armed conflict in the region, opening possibilities for real change. That is why the organizers of the Ojo al Sancocho saw the need to create a dialogue between the peace process in Colombia and that of Guatemala through cinema. 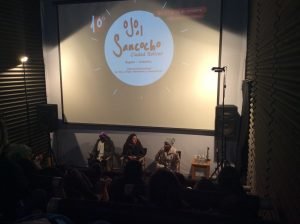 So I traveled back to Bogotá between October 7th and 15th, 2017 and returned to Ciudad Bolivar who welcomed me and more than 40 filmmakers, activists and academics from all over Colombia, the continent and other parts of the world. The Potocine became our fort, a space that was filled with people, art, culture and movement.

On the opening night of the Ojo al Sancocho Festival, people could not fit in the cinema.  Girls, children, old people, whole families along with the delegation of guests, lined up to enter. Carolina Dorado, part of the Sancocho leadership, invited us to organize so that we all fit inside the room. 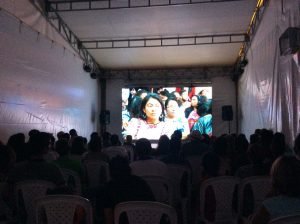 Whenever the documentary is projected I get nervous, I think about the reactions, the questions, the criticisms of what they will see and in this particular case I think about the two war stories shared by Guatemala and Colombia. Daniel Bejarano introduced me and María Aguilar, a Guatemalan historian invited to be at the festival and asked us to present the documentary. We talked about the possible peace, that which the powerful do not sign, but the one that is built from the community and that needs justice, memory and truth to be born. We accompany the 108 minutes of the documentary. I could hear the laughter, sobs, reactions of surprise and indignation. Whispers: “it’s the same here” that were often heard.

At the end, the whole room was excited, with whistles and applause we began the questions and comment. Listening to the analyses of Colombians who confront the war daily in their communities – it’s hopeful but sad to know that with this documentary film we Guatemalans are able to offer ideas from our own struggle for peace. It fills me with emotion.

So we went through the week, we presented 500 years in the National Center of Historical Memory, the conversation focused on the processes of transitional justice, on the fight against corruption and impunity.

Ambulante Colombia Film Festival organized a series of presentations of the documentary in several Colombian heritage cities, so I flew from Ciudad Bolívar to Bucaramanga, capital of the department of Santander located in the northeast of the country. The warm climate and its vast cultural diversity make it a picturesque city. The documentary was featured as one of the opening activities of the National Heritage Meeting, which brought together hundreds of organizations dedicated to the promotion and protection of the country’s natural and cultural heritage. After the screening, a member of the audience stood up and said, “This is like a prophecy for Colombia”. One of patrons was emphatic about the important similarities between the Guatemalan and Colombian experiences, and urged the audience to recognize the importance of telling the history of the country from the point of view of grass roots communities and challenge the official version of that history. 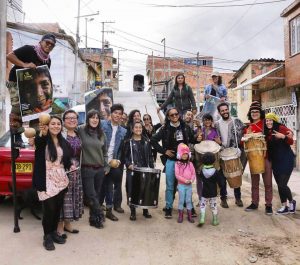