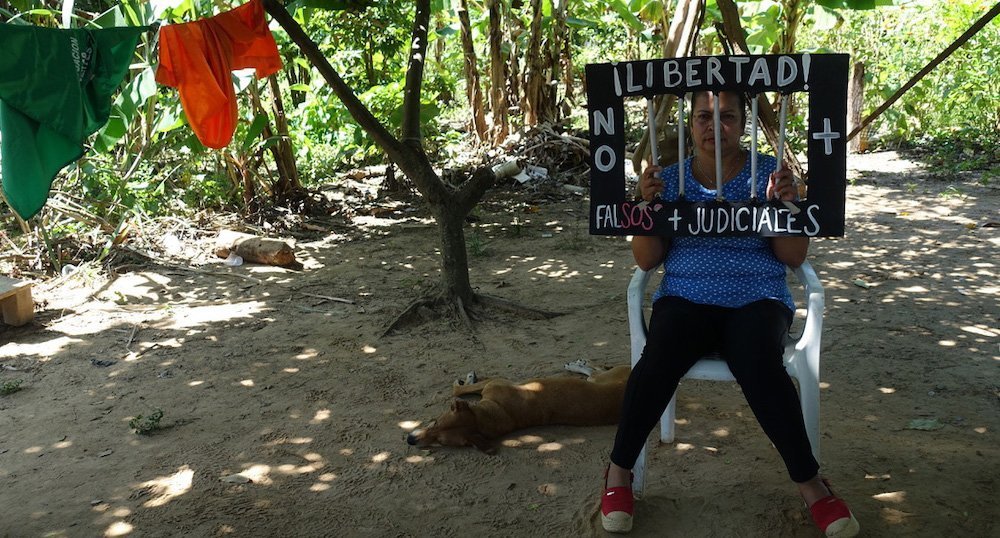 Posted at 14:11h in Journal by Pamela Yates

The day that Iván Márquez, the FARC guerrillas’ lead negotiator in the Colombian peace process, announced that he was returning to armed struggle was the day that I met the remarkable activist Ninfa Cruz in rural Casanare.

On August 29, 2019, we were set to film a profile of Ninfa as part of our program VIVX, Virtual International Volunteers Xchange, an idea that emerged from our program SolidariLabs Colombia.  VIVX is meant to create a virtual network of international accompaniment to add a layer of protection for activists and human rights defenders who are most at risk of being killed for the work that they do and are already being physically accompanied by organizations such as Peace Brigades International (PBI).  This international cohort of volunteers could be activated when necessary to transmit the message that “the whole world is watching.” In Colombia, 500 such leaders have been assassinated since the Peace Accords were signed in 2016, and this pattern of systematic elimination of rights defenders is spreading throughout the world.   We’re hoping that VIVX will help raise awareness of these grave attacks on human rights activists, and the role that we all as global citizens can play in protecting them.

Ninfa is the founder of a social cooperative that gives advice and rights training to peasant communities (known by its Spanish acronym COS-PACC). She is a community organizer working under difficult conditions and trying to help displaced people from other parts of the war in Colombia settle into the fertile plains of Casanare. Her work helping peasants organize, leading them to take back their land, and educating them to know their rights, has made her a target. She is such high risk that PBI provides international volunteers to physically accompany her to high profile events, but they can’t shadow her 24/7.

And that’s where VIVX comes in. Based on the film profiles we produce of people like Ninfa, and other details about each activist, leader, human rights or environmental defender, we aim to attract international volunteers who connect with each at-risk activist through a mobile app we are developing.

Ninfa grew up in a peasant family. She left home as soon as she could to work in the regional capital, Yopal. The peasant movements roiling the great plains of Casanare inspired her and she wanted women to be free of men controlling them (having experienced physical abuse in her own childhood home). She wanted to lift women up and educate them. This was the inspiration for founding COS-PACC, now in its 17th year of operations. Ninfa is a natural organizer and most welcome wherever she travels to peasant communities. At protests she refuses a mic and projects her own rich voice for all to hear.

Because of her talent as an organizer, and the widespread respect she receives she’s been threatened, harassed, and followed by police. While we were filming together, the police followed us, stopped us and checked the whole crew’s documents. We were under surveillance. Upon leaving Yopal by plane, the police took two of our crew members to another room to make a record of their IDs.

The Marquéz-led faction of the FARC re-taking up arms could embolden the security forces and paramilitaries opposing them to target Ninfa. They could dub Ninfa and her fellow organizers as FARC guerrillas in an attempt to ‘justify’ violence against them. Things are tense. She needs protection.

We hope to bring additional attention to brave individuals like Ninfa, working in collaboration with local communities in Colombia who are working every day to exercise their rights and live in peace. Though VIVX and programs like it cannot replace a comprehensive and lasting peace, we believe that amplifying the stories of defenders and providing pathways for international support of them can be incredibly valuable as they navigate very real dangers.

Featured image: Ninfa Cruz is the founder of COS-PACC (Peasant Communities’ Organizing and Teaching Cooperative). In this image she is protesting the criminalization of activists, putting them at risk of harm. 500 activists have been assassinated in Colombia since the signing of the Peace Accords in 2016.