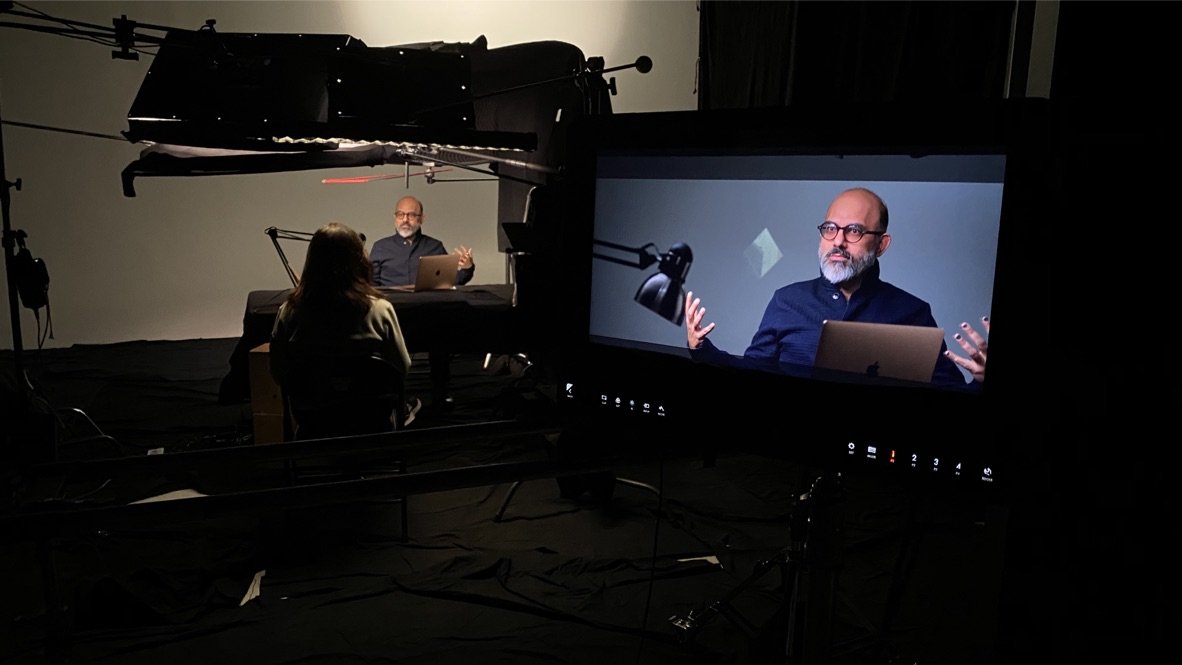 Posted at 10:43h in Journal by Pamela Yates

It was the Friday before the weekend when New York City stopped. Our Director of Photography had just flown in from a job in Amsterdam though by the next day, flights from Europe were banned. We’d gotten everyone together and were scouting for our big shoot with the team of digital scholars at Butler Library at Columbia University, when we got word that the University was going dark due to infections. Immediately. Everyone out. No exceptions. Then, President Trump declared a national state of emergency.

We scrambled to find an alternative. What if we could find a studio space where we could create a visual sense of virtual space that reflects where the team of digital scholars normally operates, and that had suddenly become the new normal for society at large? We found one way out near Industry City in Brooklyn, and raced out to scout it, to book it. We filmed long days over the entire weekend as the city outside became the epicenter of the corona virus in the U.S. It was tense but we were the only people in the studio and exercised extreme caution amongst ourselves. These were important scenes that needed to be filmed as they are the connective tissue that weave all the stories in Borderland together and it allows us to continue editing.

Since then, we are proceeding with production by checking in with and filming (virtually) on Zoom with all the protagonists in Borderland. The pandemic is making more visible the terrible injustices and uncertainty among refugees and migrants. Many of these problems were already present, but the pandemic is making them more acute. And at this moment the protagonists are segueing into working on freeing tens of thousands of detained immigrants and refugees, lest the ICE detention centers become COVID-19 death camps. Alex Gil and members of the xpMethod Project were working 24/7 using Columbia University library’s 3D printer to create face shields for first responders and medical people at the New York City’s strapped hospitals. Brought together by Fernando García, the Director of the Border Network for Human Rights, more than 40 organizers, border residents from immigrant families are learning to use zoom to meet and are organizing how to continue to teach people how to know their rights during the time of the virus – now more important than ever. Drs. Scott Allen, Pamela McPherson and their colleagues, using scientific and medical arguments have written a 7-page letter to Congress pleading for the release of all held in detention and published a hard-hitting Op-Ed in the Washington Post. Their conclusion reads:

“The spread of the coronavirus may only be the tipping point for what can happen when we fail to consider all the costs and consequences of our system of mass incarceration. We justify locking people up to protect public safety. Yet public safety will be at even greater peril if we fail to mitigate risks associated with confining too many people in jails, prisons and detention facilities during a pandemic.”

When filming and recording on Zoom, one on one, we have the protagonist film “gallery view”, the wide shot, while we film “speakers view”, the single or close up. This gives us ample editing options. Now we’re setting up to film virtual meetings among the Border Network organizers, and among the Armadillos: Search and Rescue where we will record all the faces in the gallery, many voices brainstorming about what to do, and how to do it. The story we have been filming for Borderland has turned even more dramatic and more urgent as questions of life and death are at stake. This approach to filming reflects the zeitgeist of these times, and how in the struggle for social justice, we have all had to find ways to combine COVID-19 induced isolation with actions generated from virtual space.

The xpMethod team from Columbia University is collaborating with us by expertly scraping the web for visual and aural material that manifests the Border-Industrial Complex through the actions of ICE, the Border Patrol, the network of detention centers and deportations that are being recorded by citizens around the country.

And we are working closely with MindBomb animation and graphic design studio to develop visual representations of the virtual world where we now operate.