09 Dec The Power of a Nobel Laureate

Posted at 17:55h in Journal by Pamela Yates

It wasn’t always this way. Rigoberta Menchú wasn’t considered one of the best-known people in the world in 1982, when she came to our Skylight studio. She was 22-years-old and had been forced into exile from Guatemala, fearing for her life. When we released When the Mountains Tremble, the film we collaborated on with Rigoberta to tell her story, the New York Times critic–in a mean-spirited, racist review that failed to even say her name–wrote, “An Indian woman…wanders in and out talking about oppression. She also alludes to the non-existent US military aid. The documentary does not supply her with a translator, we read her words in subtitles…typical of this muddled production.”

When the Mountains Tremble went on to become a classic of political documentary filmmaking, seen by millions, helping to put Rigoberta on the world stage. Her best-selling memoir, “I, Rigoberta Menchú”, is still widely read today. And she tirelessly traveled the world, an activist-diplomat advocating for indigenous rights, an end to the violence in Guatemala and peace throughout the Americas.

Then came 1992. The 500th anniversary of Europeans arriving at what is now known as The Americas where there were flourishing, strong civilizations. Indigenous peoples’ achievements in knowledge were met with blood and fire. The Nobel Committee chose Rigoberta Menchú to be awarded the Peace Prize on this 500th anniversary as a recognition of her historic role in shedding light on that genocide, her innovative ideas about ways forward and as reparation for civilizations plundered.

Rigoberta offered these reflections on what the Peace Prize has meant to her:

The 1992 Nobel Peace Prize was an unprecedented responsibility in my life and in the lives of all the people with whom we had led the struggle – to realize the dream of legitimizing the truth and the dignity of Indigenous peoples. It has been 30 years of intense work in alliance with many movements and diverse sectors. I believe that we have created precedents in the collective memory of Indigenous peoples, in the taking of women’s rights and especially in regard to the history of human rights. I am currently a Professor teaching at the Autonomous University of Mexico (UNAM) Law School and also a Senior Researcher coordinating the study of humanities at UNAM.

As the first indigenous person and at that time the youngest (she was 32-years-old), she quickly recognized that as a Nobel Laureate she was in a position to spearhead an unprecedented quest for justice in the Guatemalan genocide. She brought a case against eight high-ranking Guatemalan Army officers in the Spanish National Court (Audiencia Nacional) under the principle of universal jurisdiction,​​ the right to prosecute the worst crimes, even if they take place in another country. The case in Spain emboldened Guatemalan judges and jurists to try the case domestically and in 2013 the first trial for genocide and crimes against humanity against indigenous people in the Americas began in Guatemala. 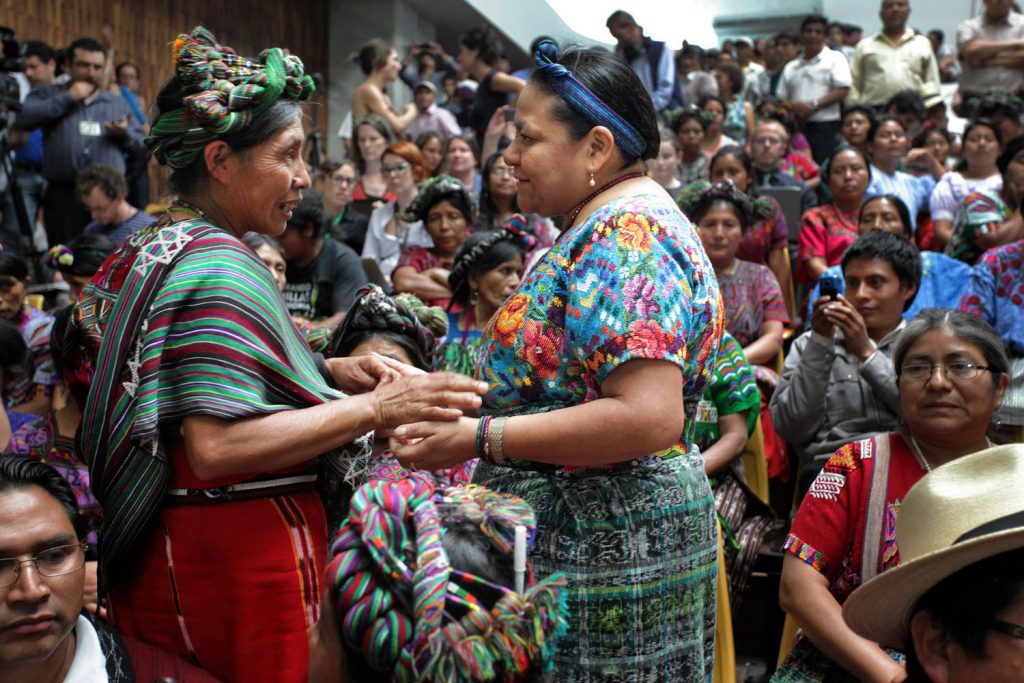 Rigoberta Menchú with a Maya-Ixil survivor at a genocide trial, 2013. Photo: Daniel Hernández-Salazar from 500 Years

Every trial creates a new narrative with a different historic perspective, and Rigoberta didn’t stop after having created this precedent. She then worked to bring to justice those responsible for the 1980 burning of the Spanish Embassy in Guatemala, killing all 38 peaceful protesters inside, including her father Vicente Menchú. She has never given up on searching for and advocating on behalf of the families of the 45,000 people disappeared during Guatemala’s civil war.

Rigoberta’s rise as a global leader dedicated to transitional justice and human rights, unafraid of going after Guatemala’s military and political elite, brought a huge backlash against her. She had to be stopped from bringing to light the systematic oppression and genocide of Maya communities by the Guatemalan oligarchy.

Genocide denier and American anthropologist, David Stoll, investigated her life’s story and accused her of fabricating facts. Larry Rohter of the New York Times wrote the Page 1 article “Tarnished Laureate” and asked the Nobel Committee about revoking the Nobel Peace Prize. The Committee declined stating that the award was given for her human rights efforts, not her family history. Rigoberta explains that she was telling the collective story of the Mayas, not just her individual family experience. Yet she has suffered a long, destructive campaign to defame her, especially in the Guatemalan press.

Rigoberta ran for president twice, and as the most famous Guatemalan, she is widely admired abroad and at home. My dear friend Maya K’iche’ filmmaker, human rights advocate and innovative culture hacker Andrea Ixchíu Hernández told me that as a girl:

“I was thrilled by and looked up to an indigenous woman speaking to a whole auditorium of people about the 500 years of indigenous resistance. Doña Rigoberta was exemplary, she allowed our families to talk about the war, the violence and to confront a culture of silence. And she’s spread the ideas of our Maya cosmovision around the world. Sadly, so many of the things we sought to change remain the same. Right now, today, we are seeing a Maya Q’eq’chi community that the police are trying to throw off their own land, yet they persist, planting their crops in the face of land grabs by monoculture palm oil plantations. May Doña Rigoberta continue to open many paths for us ensuring that the voices of indigenous people resonate around the world!”

In honor of Human Rights Day and the 30th anniversary of Rigoberta Menchú’s Nobel Prize, we encourage you to read her acceptance speech.

Rigoberta Menchú and I on the set of Granito

And as a Skylight supporter, I think you’ll get a good laugh at the original New York Times review of When The Mountains Tremble I mentioned above, at how wrong the reviewer was about the film in contrast to its long-lasting impact and stylistic choices, which were ahead of its time.