04 Feb Using a Film to Nail a Dictator

HOW TO NAIL A DICTATOR

Efrain Ríos Montt is going to trial. The brutal Guatemalan dictator is the first head of state to be prosecuted for genocide in genuine proceedings in his own country. And my video evidence helped send him there.

I went to Guatemala in 1982 to make my first feature-length documentary When the Mountains Tremble. Rigoberta Menchú, the protagonist, lays out what was happening from the Mayan perspective – why they were fighting, what they were fighting for, and how the civilian population was being viciously targeted by the Army in a scorched earth counter-insurgency campaign backed by the United States.

After Peace Accords were signed in Guatemala in 1996, a Truth Commission uncovered evidence that “acts of genocide” had been perpetrated by the State. This occurred during the bloody tenure of General Efraín Ríos Montt, the President and Head of the Armed Forces from 1982 – 1983, a period when the civilian massacres spiked. Yet whenever the possibility of seeking justice for Ríos Montt’s horrific crimes came to the fore, the General and his legal defense made excuses. Their primary assertion was that the General hadn’t known about it, nor had he ordered it. They ascribed the massacres to “rogue” elements in the Army. 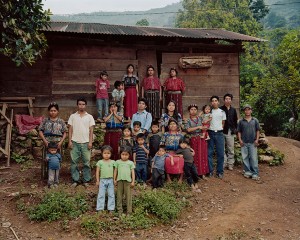 In 2003, I went to Guatemala to present the first public screening of When the Mountains Tremble at the University of San Carlos in Guatemala City. Although it premiered at the first Sundance Film Festival and was broadcast throughout the world, the film had been banned in Guatemala for 20 years. The auditorium was packed, standing room only. People told me as I entered that they had shown When the Mountains Tremble clandestinely thousands of times during the war years.

In the audience that night was an international attorney. She approached me afterwards and asked whether I had kept all of the filmic outtakes from When the Mountains Tremble.  She was investigating a genocide case, and two of the generals in When the Mountains Tremble were part of that investigation – General Efraín Ríos Montt and General Benedicto Lucas García.  Could I go and find the entire interviews I’d done with the Generals? Could I find all of the film of military missions including aftermaths of massacres?

And so we embarked on a kind of archeological dig through 25-year-old outtakes of 16mm negative film and ¼ audio recording tape, the raw materials of When the Mountains Tremble. Miraculously, I and my Skylight Pictures partners—Paco de Onís, the Producer, and Peter Kinoy, the Editor—had kept all of the outtakes in a warehouse in the swamplands of New Jersey.

The lawyers were as surprised as we were when they saw the outtakes.. In 1982, I had asked: “What would you say to the charges that it’s the Army that is massacring (Mayan) peasants in the highlands? Is there repression on the part of the Army?”

Ríos Montt responded, “There is no repression on the part of the Army. Our strength is in our capacity to make command decisions. The Army is ready and able to act, because if I don’t control the Army, then what am I doing here?”

All of this became part of the film GRANITO: How to Nail a Dictator, as well as the legal case. The prosecution actually projected parts of GRANITO on the walls of the courtroom during the evidentiary hearings. I was asked to testify in the case, show and verify the filmed material in court. It was important for me to testify to the fact that I had actually filmed all of the projected film and that the Judge see me there in the footage from 1982. I entered the DVDs of the outtakes and entire transcripts of interviews which had been typed on a manual typewriter in triplicate with carbon paper, as exhibits into evidence. I will never throw out anything ever again. 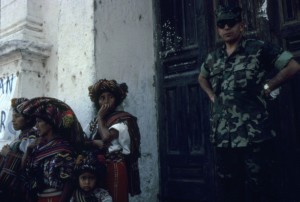 The search for forensic evidence was the genesis of GRANITO: How to Nail a Dictator.

I wanted to tell the story of the Guatemalan people who had never given up on the quest for justice to seek redress for the sole genocide in the Americas of the 20th century – the Guatemalan state’s attack on the Maya people – and include the role a documentary film played in that process. Because I was in every shot of the original footage, so that we could sync the image of me slapping the microphone with the 16mm film, we decided to include me in GRANITO, as a documentary filmmaker, as a witness. I wanted to relate not only the acts of genocide that occurred in Guatemala, but share my experiences over the years as a human rights filmmaker, for the next generation of documentarians.

The meaning of the word “granito” or tiny grain of sand, is a Mayan concept based in their communal values. It says that each of us has something to contribute to positive social change or in this case, justice. And that together we can make that change. The survivors, forensic anthropologists, archivists, and attorneys inside Guatemala and around the world have been tirelessly contributing their granitos.

In the past year the gathering of evidence and testimonies, plus the political will to prosecute in Guatemala have reached a justice tipping point. Last week, a Guatemalan judge cleared the way forward.

This blog post first appeared on the WITNESS blog.