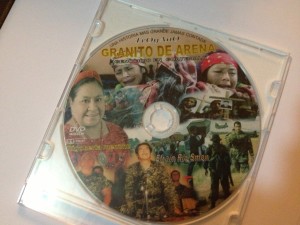 Yesterday began the historic trial of retired General and former dictator Efraín Ríos Montt on charges that he committed genocide against nearly 2000 Maya-Ixil people in Guatemala in 1982 – throngs gathered inside and outside the courtroom.  The dictator finally facing justice!  Guatemalan bootleggers at the scene saw this as an opportunity to sell pirated DVDs of our film Granito: How to Nail a Dictator, which tells the story of how our film became evidence in the genocide case.  If you look closely at the text at the top of the DVD, it says “UNA HISTORIA MAS GRANDE JAMAS CONTADA” (“A GREATER STORY NEVER TOLD”).  There is no honor or award that could surpass this endorsement of our film by the Guatemalan people.  Bootleggers all over the world are tuned in to their cultures, and what people want to see and hear.  Having your film bootlegged in a country is a great affirmation of its value in that society, whether it be for entertainment or in this case, hunger for a suppressed history and the restoration of collective memory.  The street price, by the way, is 10 Guatemalan Quetzales (US$1.25).