21 Apr The Battle for Guatemala

Posted at 19:47h in Human Rights in Focus, Journal by Paco de Onís

Last week the battle for the soul of Guatemala came to a head during the genocide trial of former dictator Efraín Ríos Montt. After the prosecution rested its case midweek with a screening of the full interview of General Ríos Montt conducted by Pamela Yates in 1982, the Ríos Montt defense said that their witnesses weren’t reachable, that their videos weren’t ready, and so forth – they were clearly delay tactics, in the face of which Judge Yasmín Barrios adjourned the trial to give them time to come back the next day prepared to defend their client. 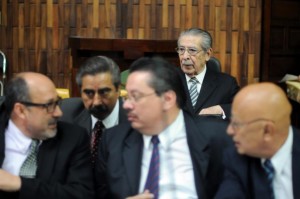 As soon as she left the courtroom the defense team rushed to present a motion to the prosecution that they had filed in another branch of the judicial system, demanding the annulment of the trial. This led to a rather comical press crush that swung back and forth between the defense and prosecution tables as everybody tried to figure out what was going on. The defense strategy became clear – rather than prepare for a trial and gather evidence that would defend their client Ríos Montt, they applied their tried and true tactic of having a judge in the judicial system emit questionable rulings favorable to their aim of blocking or shutting down any genocide trial against Ríos Montt. 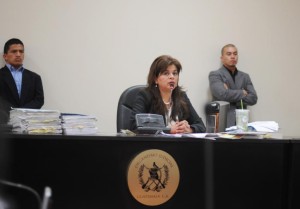 That judge turned out to be Carol Patricia Flores, who has a checkered record of handing down questionable if not outright illegal rulings that reveal a pattern of bolstering entrenched impunity in Guatemala. Before her ruling to stop the trial was made official at 2pm on Thursday afternoon, that morning the Ríos Montt defense team had staged a stormy exit from Judge Barrios’ courtroom, shouting that the trial was an illegitimate sham. With only a couple of days left for the trial to conclude, their move of last resort was to try to delegitimize the trial and force it to shut down. After Judge Flores issued her ruling that afternoon before yet another press crush, it was followed by TV, newspaper and radio attacks on Judge Barrios and Attorney General Claudia Paz y Paz, impugning their character and questioning their motives, and giving voice to Ríos Montt supporters that claim there has never been a genocide in Guatemala. 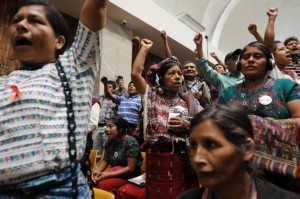 But AG Claudia Paz y Paz fought back saying that the Judge Flores ruling was illegal, and the next morning Judge Barrios convened her court and announced that she also considered the ruling illegal and that she would not heed it, and she was asking the Constitutional Court (Corte de Constitucionalidad – the ultimate judicial arbiter in Guatemala) to make a decision on whether the case could proceed. This led to a huge cheer from the audience and prolonged chants of “justicia, justicia” – it was an extraordinary moment and will go down in the annals of human rights history no matter which way the Constitutional Court decides (they have 10 working days to decide as of this past Friday April 20). The swell of emotion was clear in Judge Barrios’ expression as she clasped her hands to her heart and thanked the audience – she became an instant human rights hero. 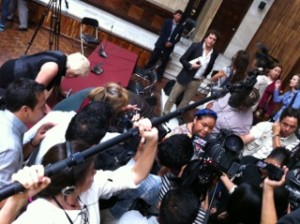 In many ways all of this has made me think of the Jim Crow trials in the American South, reminiscent of “To Kill A Mockingbird”, with Judge Barrios being the Atticus Finch of this story, standing up against the deeply powerful forces of impunity. “To Kill A Mockingbird” was the first film that Pamela Yates ever saw and it opened her eyes to injustice in the world and put her on a path that led to the making of “When the Mountains Tremble”, “Granito: How to Nail a Dictator” and now “The Dictator in the Dock” (working title). Rigoberta Menchú was in the audience as well, and all these days at the trial I’ve often thought of her and Pamela’s parallel journeys in seeking redress for the tragedy that befell Guatemala, and how their paths have crossed again at this dramatic juncture of history.

With the court session closed, the gathered crowd spilled into the streets and marched 10 blocks through downtown Guatemala City to the doors of the Constitutional Court, demanding that it not become a court of impunity. Now we wait to hear what they will decide.

One big factor in play is how much the prospect of international opprobrium might play in the decisions of the judges, and how much pressure they might be getting from President Otto Pérez Molina one way or the other. While some say that Pérez Molina is wary that the genocide trial could eventually implicate him for his role in 1982 as military commander of the Nebaj army base (in the Ixil region), he has also made a great effort to position himself in the world as a respected statesman, by having Guatemala join the International Criminal Court the day after he took office; getting invited to the Clinton Global Initiative; receiving the Key to the City of Madrid; and so forth. A vote for impunity by the Constitutional Court could deal a serious blow to that image, and could spark a very embarrassing international campaign against impunity in Guatemala that could bring to light many facts beyond what has been presented at the Ríos Montt trial already. This week could tell what the future holds – stay tuned. 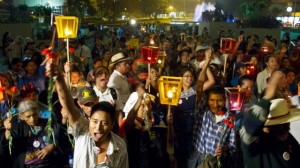