22 Sep Farewell to a Giant of Human Rights

Posted at 16:43h in Human Rights in Focus, Journal by Paco de Onís 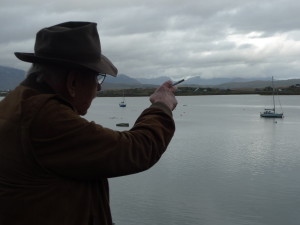 On May 16 of this year the world lost Clyde Snow, one of the greatest defenders of human rights of our times.  Clyde was a tall garrulous Texan with an easygoing manner that masked a tenacious commitment to finding the truth and advancing justice through the science of forensic anthropology applied to the exhumation of victims of mass atrocities. As Clyde often said, “the bones tell stories.”  And these were stories that often helped land the perpetrators of heinous crimes in prison, from Argentina to Guatemala, the Balkans, Rwanda and beyond.  And although the world won’t be the same without Clyde, his work lives on through the crack forensic anthropology teams he formed in Argentina, Guatemala and Peru, two of which are featured in our films “State of Fear” (Peru) and “Granito: How to Nail a Dictator”.   The young people that he trained, like Mimi Doretti (Argentina), Fredy Peccerelli (Guatemala), and Jose Pablo Baraybar (Peru), amongst many others, are carrying on his legacy in all corners of the world.  As Fredy says, “He changed the world and Guatemala. He also changed every one of us that were fortunate enough to work and share life with him.”  And here at Skylight, Clyde’s example of courage and tenacity in the quest for justice has been a constant inspiration, informing all of our work.  This Saturday, September 27, we will be attending a memorial service in Norman, Oklahoma, where he lived with his wife Jerry.  We miss you Clyde.

“Wherever atrocities had been covered up he would soon appear, a polite but rumpled figure in a tweed jacket with a fedora tilted on his head. His ways of working could seem casually slow, starting at noon and punctuated by many a meal of good steak and good wine. But his intensity of purpose, to bring to justice the rational, well-dressed men who had sat round a table and ordered mass killings, was ferocious.”    (Anne Wroe 05/24/2014)

Read his full obituary in The Economist.