13 Nov Passing it On: An Interview with Filmmaker Monica Wise Robles

Posted at 18:33h in Journal by Pamela Yates

“Passing it On” is a Skylight series of interviews with emerging filmmakers, artists, documentarians focused on collaborative, ethical storytelling with historically disenfranchised communities around the world.

I’m proud to host this interview with Monica Wise Robles about her debut film short Lupita, opening this week in New York as part of DOC NYC Film Festival. Monica came to work with us at Skylight right out of college and contributed to the outreach and impact campaign for our film Granito and worked on the pre-production leading up to 500 Years.

Monica is a Colombian American documentary filmmaker and video journalist based in Mexico City. Her work focuses on intimate stories of resistance across borders to highlight feminist, LGBTQ, migrant, and indigenous narratives.

How did you come to know Lupita Vásquez and why did you want to tell this story?

I started filming this story in the fall of 2017, as Marichuy, the first indigenous woman to campaign for the presidency of Mexico, started her tour in Zapatista caracoles, autonomous communities created by the Zapatista National Liberation Army (EZLN). Lupita was chosen to speak alongside Marichuy, along with other community and National Indigenous Congress–appointed councilwomen from all over Mexico (representing over 300 indigenous communities). I was inspired by this historic moment led by indigenous women and set out to find a story to document within it, arriving in Chiapas with nothing but a motel room booked for the first night, my camera, a change of clothes and a monopod.

Lupita is a captivating orator and I knew immediately that she should be the one to tell the story of 500 years of indigenous resistance, in a contemporary Mexican political context, to a global audience. Months later, I teamed up with a local journalist Eduardo Gutierez Pérez to film and Lalo (as he is known), who heads up the communication team for the Abejas de Acteal, Lupita’s organization, was thankfully eager to collaborate. He produced and shot the film with me, and translated the Tsostil to Spanish.

In amplifying her story, what impact do you want to have with the film?

We made the film so that Lupita’s voice could be heard, reach new and international audiences and raise awareness of Lupita and her community’s struggle. There has not been justice for the Acteal massacre, the attack by paramilitaries that killed 45 people in Lupita’s home town in 1997, including her mother and father. Those who ordered the killings who were in power at the time have not been held accountable. The Mexican government recently offered an amicable solution or ‘solución amistosa,’ or reparations to a group of survivors with the pretense of justice being served. The Abejas (a civil society organization Lupita belongs to- more about them below) continue to demand a report from Inter-American Commission on Human Rights, and will not rest until justice is served in court. They believe this can only happen internationally.

I know that the work on the film isn’t finished until it gets to the right people, those who tell their own story in the film, so we’re fundraising and planning a tour in the highlands with Lupita, Lalo and the Abejas organization. You can join us here.

Who are the Abejas de Acteal (The Bees of Acteal), the organization that Lupita is part of?

The Abejas of Acteal is a civil society organization that was started in 1992 in part by Lalo’s and Lupita’s families, founded on principles of nonviolence, human and women’s rights, and indigenous autonomy. It was founded in part as Tsostil women organized to give women the right to own their land. A part of the Abejas’ and Lupita’s work is the women’s traditional artesanias (Maya Tsostil textiles) which they sell in Acteal and San Cristobal de las Casas. Follow the Abejas on Facebook here.

How did you think about telling Lupita’s story filmically? How did you choose your style in terms of what was possible? 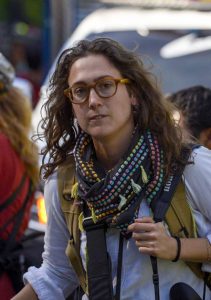 I wanted to use Super 8 film from the beginning and to make a lyrical film from Lupita’s point of view to begin to understand who is the woman, the mother, behind the vocera, the spokeswoman of her community. Acteal is still very much set in the past, and they remember the 45 victims, or martyrs, of the massacre constantly. Every time I walk into the community, I enter a different world, with a different timing, in another language. So the textured film without a date felt fitting to represent this.

I shot a few reels of Super 8mm everytime I filmed in Acteal. Even Lupita and her oldest son, Angel, filmed with that camera. I struggled to imagine what visuals to put under her testimony of the massacre for over a year. It wasn’t until Mar Jardiel, the finishing editor who brought it all together, paired some of this everyday Super 8 with the archival material, footage from Acteal following the massacre.

The rest was hand-held camera as verite as possible, many times on the fly. Sometimes we’d be waiting all day and then Lupita and the President of the board would tell me to come shoot in the cemetery because they prepped it with photos and it was time.

The process was humbling and expensive, partially because of complications with communication and access. However, by the last shoot, I felt real respect and transparency between the community, Lupita, Lalo and me. It wasn’t easy to get access–many filmmakers have been turned away. I think my naivety and soft persistence helped, but collaborating with Lalo, her best friend, from the beginning was the game changer.

It’s important to share that the film was made collaboratively almost over three years and the work is not over. We’re starting to show it in schools, local community outreach festivals, seeing how to use it best as a tool, especially in Chiapas. Speaking events serve to reinforce our work as a team, and needless to say we have learned so much from each other, we’ve grown as media makers and people.

Our first and only live theatre screening was at Kinoki, the only local theatre in San Cristobal de las Casas last December. Several members of the crew came, the theatre was packed and the film a great response. It was there, with the applause and appreciative Q&A, that I think Lupita realized that her message would be valued locally and around the world, that her sacrifices and all the uncomfortable time behind the camera would be worth it when her message could affect more people.

Then COVID hit and we had the world premiere online with the Ambulante Film Festival (the Mexican traveling film festival founded by Gael García Bernal and Diego Luna) in May 2020 and the film was celebrated online and on social media. It seems to resonate here in Mexico above all, even for those who didn’t know much about the history, and this is another achievement.  Lupita had its international premiere at the Sheffield Documentary Film Festival and now is having its New York and US premiere at DOC NYC, playing right now.

What does Lupita represent in the larger Mexican context and throughout the Americas as an indigenous woman in political leadership? Do you think we will hear and see more from her and Marichuy in the future?

Marichuy’s campaign was a breakthrough moment for national indigenous leadership, though it is still difficult for women to achieve  leadership positions. At the end of production, Lupita left her position as councilwoman of the Chiapas Highlands for the Indigenous Governing Council. But we didn’t end up including the machista complications that brought her to step down: “issues that any woman deals with in any organization” as she put it plainly. Lupita continues being an active leader in her community, and with this film. I’m also curious to see where she is five, 10 years from now. She heads up the Abejas team of artesanas, or craftswomen. I’m selling their face masks with traditional Tsostil bordados (embroideries) so contact me via the film’s Instagram or email if interested!