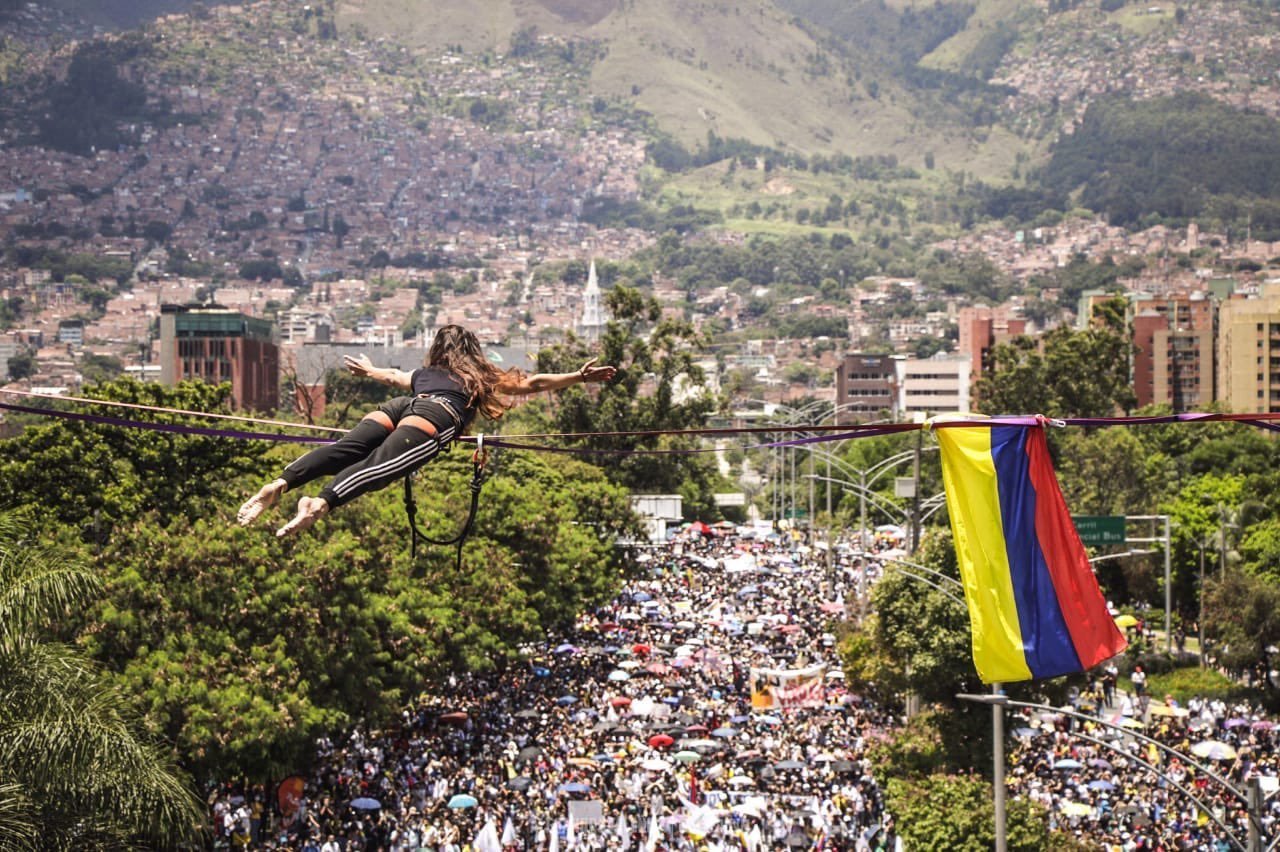 Let me start with a personal note: I first arrived in Cartagena, Colombia many years ago shortly after being enthralled by Gabriel García Márquez’s magnificent novel “100 Years of Solitude,” a story that lit my imagination and in many ways set the course of my life which has hewed close to Colombia to this day. Cartagena in the mid-70’s felt like a time warp, a dilapidated Spanish colonial bastion that had once warehoused pillaged gold to be transported across the sea on caravels and then returned with enslaved Africans. It all felt a piece with the mythical Macondo magical realist world of García Márquez. I stayed there for 10 years and with a group of friends founded the Caribbean Music Festival in 1982 as a way to celebrate and affirm the beauty of Colombia’s music and its shared origins with music from all over the Caribbean. Living in Colombia I came to feel that the power of Colombia’s music and art is rooted in its proximity to and rejection of violence. It embraces the dignity of life echoed in powerful songs like Joe Arroyo’s “Rebelión”, an anthem of resistance against the oppression and violence of slavery and by extension a cry for social justice everywhere.

The chronic social and political violence of 19th to 20th century Colombia depicted in “100 Years of Solitude” remains an undercurrent of life there now in the 21st century: endless armed conflicts with civilians caught in the crossfires of guerrillas and narcos and paramilitaries and the army all battling for domination in the vast countryside even as life in the cities remained “normal”. An oligarchy dressed up as a democracy has ruthlessly ruled over the vast inequality of Colombia while presenting a sophisticated and genteel façade to the international arena. A façade buoyed in large part by wrapping themselves in the mantle of extraordinary humanity that Colombia’s artists have projected throughout the world – the writers, musicians, filmmakers, painters, sculptors and as we can see in the photo above, even acrobats floating in the sky!

Now that façade has been ripped away from the economic elite and the government of Ivan Duque as the brutal homicidal repression they’ve unleashed is confronted by artists who are a key part of the peaceful uprising that is bringing Colombia’s cities to a standstill, a social explosion in plain sight of the world.  A tax bill which would benefit the wealthy set off protests in the midst of a pandemic which has exacerbated poverty, inequality, and unemployment. Despite the brutality of the government response, protests have continued for 28 days and counting. In Cali, the epicenter of the uprising, a whole neighborhood has become an autonomous enclave renamed Puerto Resistencia (Port Resistance).

As beautifully expressed by Colombian poet William Ospina, “What do these young people want? Well, what every bird wants: To be able to fly and sing; what every river wants, to be able to follow its path; what every life dreams of, to celebrate the world, to deserve a destiny, to enjoy this brief time we were given without feeling that bitter aftertaste that the land belongs to a few, that true life belongs to a few, that we have to let the ideas in our heads die, the talent in our hands and the love in our hearts, because the country belongs to four owners, because those who have the land leave it fallow and fence it with barbed wire, because those who think they own the culture want to keep it locked in a safe.”

Millions of youth clamoring for social justice singing Todo el Poder para la Gente (All Power to the People) and El Pueblo Unido Jamás Será Vencido led by Susana Boreal, conductor of the Revolutionary Symphony Orchestra of Colombia. As Susana says, “We musicians have had a very hard time in the midst of the pandemic and we will continue to demonstrate because, as the phrase goes, ‘They took everything from us, even our fear.’ We have nothing to lose.” 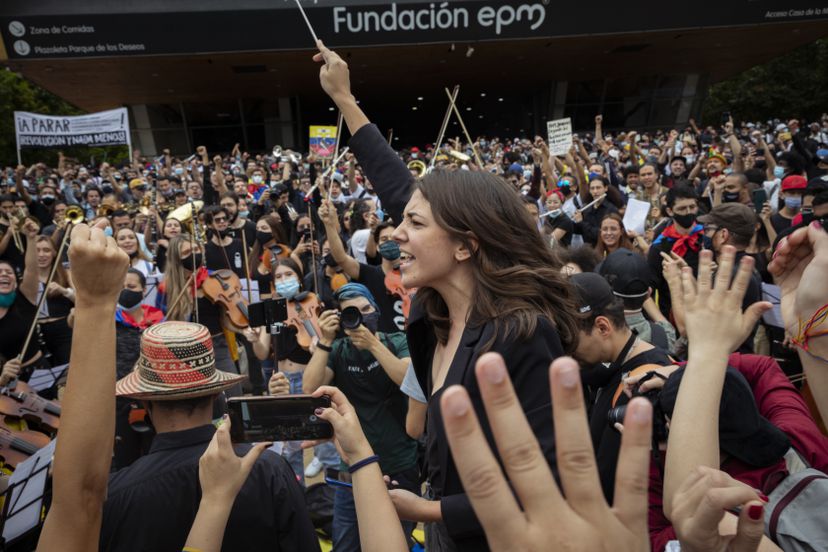 The filmmakers/artists and activists of the Skylight SolidariLabs network are mobilizing all over the country, circulating information and building the way forward, contributing their skills each from their place in the struggle. Heny Cuesta and Vanessa Cuervo coordinate the production of short films that communicate stories of hope and resilience, with Gustavo Hincapié taking charge of the editing. Emanuel Giraldo made a short film with Buenaventura resistance leader Deyci Minotta of SolidariLabs AfroColombia.  Juan Pablo Bedoya made a short film with community leader Hernando Gonzalez in Montes de María, both of them participants in the first SolidariLabs (2016).  These short films will also be part of the VIVX app we developed with defenders as a connective tool for a network of mutual support and social protection amongst filmmakers/artists and environmental/human rights defenders that we’ve formed across Colombia, Guatemala and Mexico.

The Ollas Comunitarias (community food shares) are cooking not only food for the resistance, but the strategies of organizers in the streets like The Women of the Chontaduro – an AfroColombian feminist collective – in resistance in Cali, the city at the epicenter of the struggle, including artist/activists Ana Judith “La Mayora” Gamboa and Maria Campo (SolidariLabs Afrocolombia). Laura Nuwanda in Cali, Estefanía Villa in Armenia  and Lucely Rivas in Chocó are telling new stories on podcasts, Ali Majul doing performance and organizing mural art in Cartagena. From the first SolidariLabs (2016) we have Martha Ceballos in Pasto documenting human rights abuses, and María Alejandra Mosquera organizing a resistance concert in Cali. Every granito counts, and these are only a few of this network that believes that change is possible.

The Women of the Chontaduro (some of whom can be seen below) – an AfroColombian feminist collective – in resistance in Cali. They are out there in the streets every day and need support for sustenance. You can donate here to the women of Chontaduro and it will get to them. 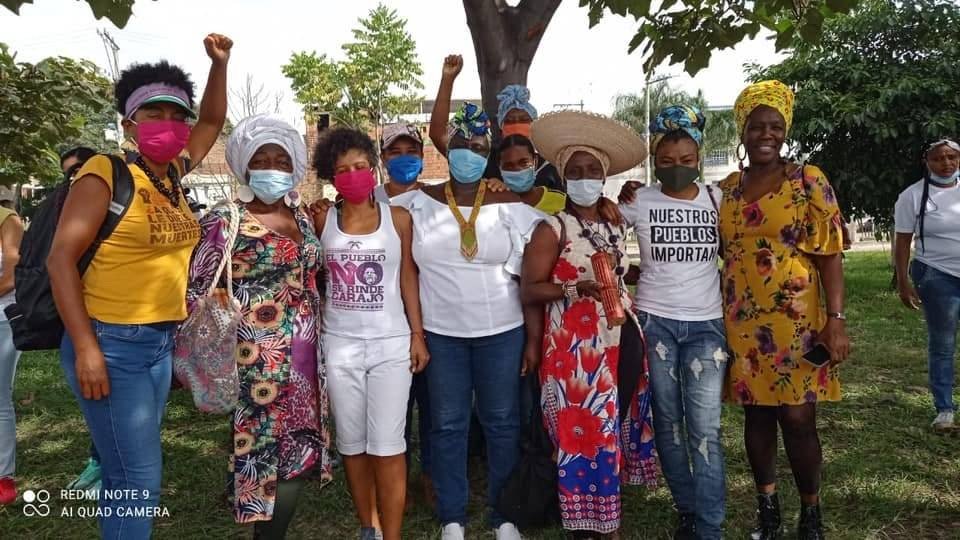 The Women of the Chontaduro – an AfroColombian feminist collective – in resistance in Cali. They are out there in the streets every day and need support for sustenance. You can donate to the women of Chontaduro and it will get to them.

By financing the Colombian armed forces through military aid packages such as Plan Colombia and the sale of anti-riot equipment to different units of the Colombian National Police, the United States government has been directly implicated in human rights violations. Several U.S. representatives, including Rep. Gregory Meeks, the head of the House Committee on Foreign Affairs, have called for the application of the Leahy Law to freeze assistance to Colombian security forces that violate human rights with impunity.

Let’s get the U.S. government to enforce the Leahy Law!