Granito: How to Nail a Dictator is a story of destinies joined by Guatemala’s past, and how a documentary film intertwined with a nation’s turbulent history emerges as an active player in the present. In Granito our characters sift for clues buried in archives of mind and place and historical memory, seeking to uncover a narrative that could unlock the past and settle matters of life and death in the present. Each of the five main characters whose destinies collide in Granito are connected by Guatemala’s past.  In 1982, Guatemala was engulfed in an armed conflict during which a genocidal “scorched earth” campaign by the military killed nearly 200,000 Maya people including 45,000 disappeared. Now, as if a watchful Maya god were weaving back together threads of a story unraveled by the passage of time, forgotten by most, our characters become integral to the overarching narrative of wrongs done and justice sought that they have pieced together, each adding their granito, their tiny grain of sand, to the epic tale.

“I just showed your film to my human rights clinic class at Santa Clara Law. As always, students were moved to tears. We’re sending an observer to the trial in a couple of weeks. Thank you again for contributing much more than a granito de arena towards justice and for your resolve in seeking an end to impunity for the genocide in Guatemala. Un abrazo solidario.”

“Anyone who cares about the Maya will not want to miss these documentaries, the prequel “When the Mountains Tremble” and “Granito: How to Nail a Dictator”. Without the evidence captured by the filmmakers, the victims may not have ever felt safe coming forward and the unprecedented trial of Ríos Montt may never have happened…astounded at the significance of this.”

“I just finished watching Granito, and I am simply amazed at what has been accomplished. It was inspiring, terrifying, and humbling all at once. Thank you so very much for agreeing to share this with us. This film has everything we could hope for. It is a perfect example of the importance of every person’s work in protecting human rights, no matter how small it may seem at the time. It make us face the ugly truth – even us here in the US – but then it offers hope, and hands the torch to the next generation of advocates.”

“I found the film to be deeply moving, an authentic look back at a dismal history of human rights violations by Guatemala’s former leaders, as well as a look forward toward historic and legal accountability. Kudos to those who made history in their tenacious search for the truth, and to those who had the courage to document the wrongs and tell the world.”

“This is an amazing story that exemplifies the importance of documentary filmmaking as a way of tracking and keeping record of the world’s crucial events and humankind’s critical behavior, and it is a tribute to the people — international human rights leaders (including Nobel laureate Rigoberta Menchu Tum, who appears in the film), prosecutors and citizen witnesses alike — who persist in seeking justice and to the survivors who have and are making valiant attempts to reconstruct their lives and carry on.” 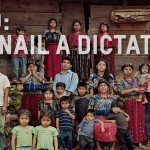